Day out in Amsterdam: Museum hopping and canal cruise | Lord Around The World 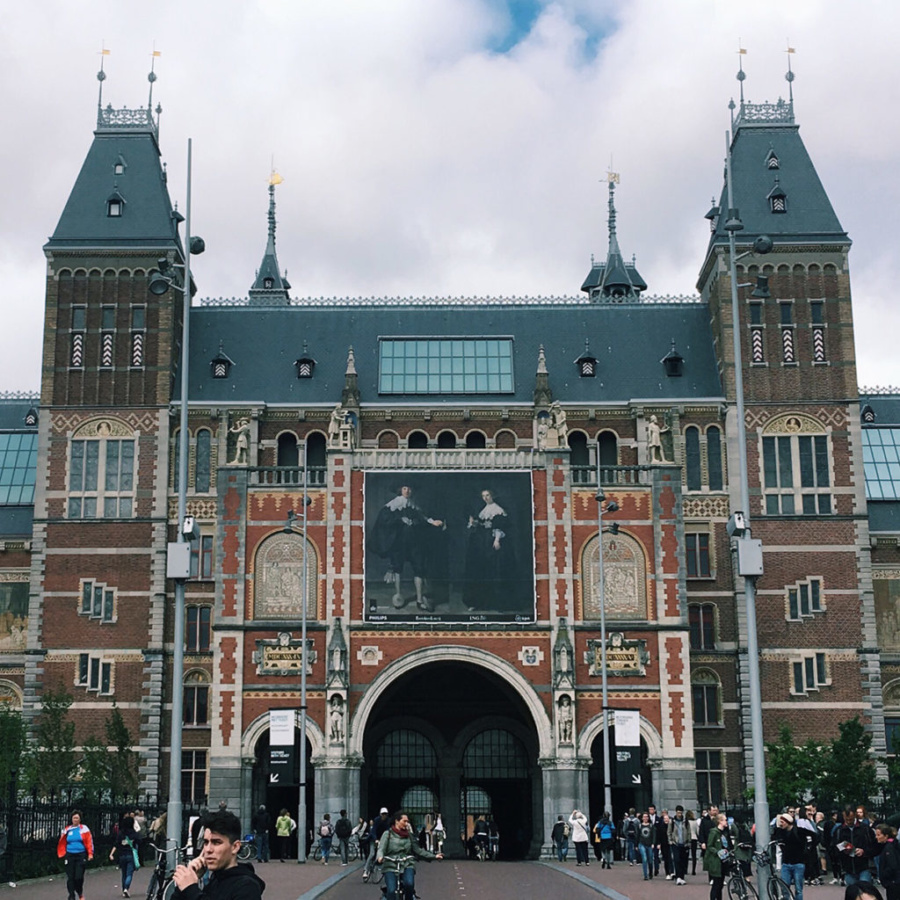 A day out in Amsterdam is not complete without visiting museums and doing a canal cruise, among other things.

Time for a proper day tour here in Amsterdam, and it must be with Sandeman of course! It was a gloomy morning when we met at the National Monument on Dam Square. It eventually poured but that didn’t stop us from continuing the tour! Round up of the spots we explored below.

De Oude Kerk (The Old Church) is both Amsterdam’s oldest church and building, dating back to about 1250. It used to be a Catholic church, but nowadays it is one of the unique buildings expressing the national character of Dutch Protestantism.

The Amsterdam Stock Exchange is considered the first stock exchange in the world, established in 1602 by the Dutch East India Company (Verenigde Oostindische Compagnie, or “VOC”). On the 22nd of September in 2000, it merged with the Brussels Stock Exchange and the Paris Stock Exchange to form Euronext, and is now known as Euronext Amsterdam.

Most, if not all, houses in Amsterdam have steep and narrow stairs. You will also notice that a lot of houses along the canals are leaning and has a hoisted beam with a hook. Here’s why! When merchants started to stock their wares into their attics, this protruding architecture allowed them to hoist the good up and down much easier without the risk of breaking their windows. Today, the Dutch people still use them to move their furniture in and out of their house. Easier than using the narrow stairs for sure! 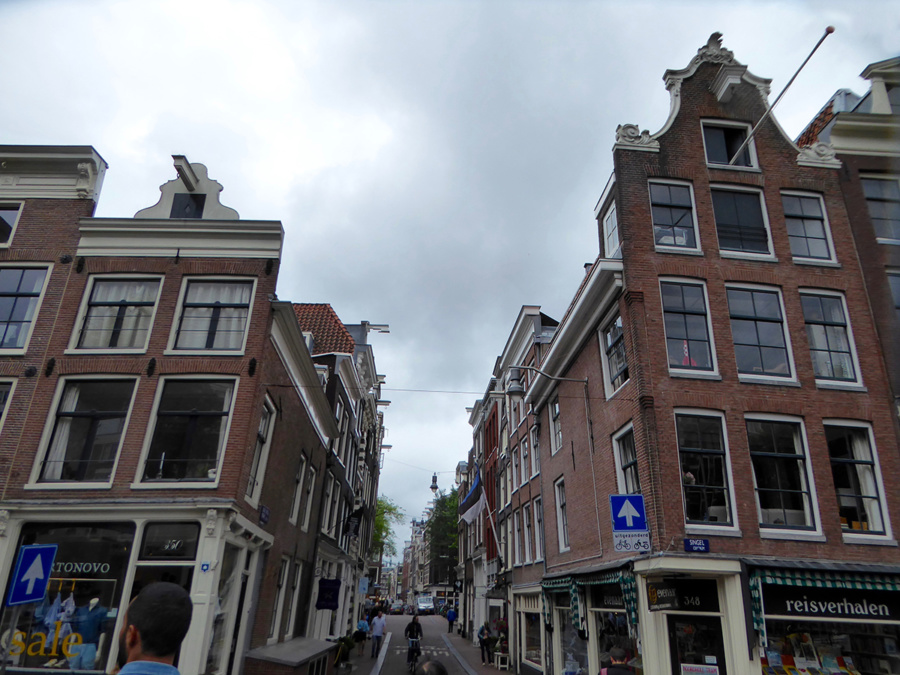 We also visited Begijnhof, a very quiet spot in Amsterdam. It’s an enclosed courtyard where Begijntjes, a Catholic sisterhood who lived like nuns, used to live. Nowadays, the houses are still occupied by single women and the quietness is still observed. 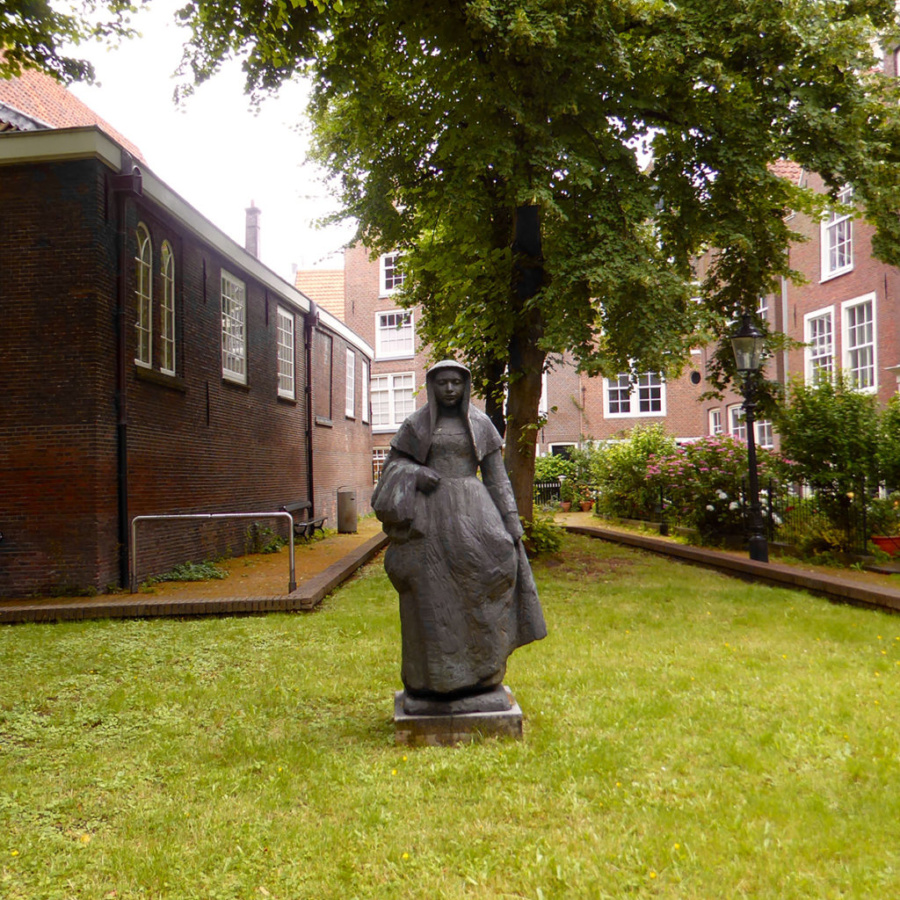 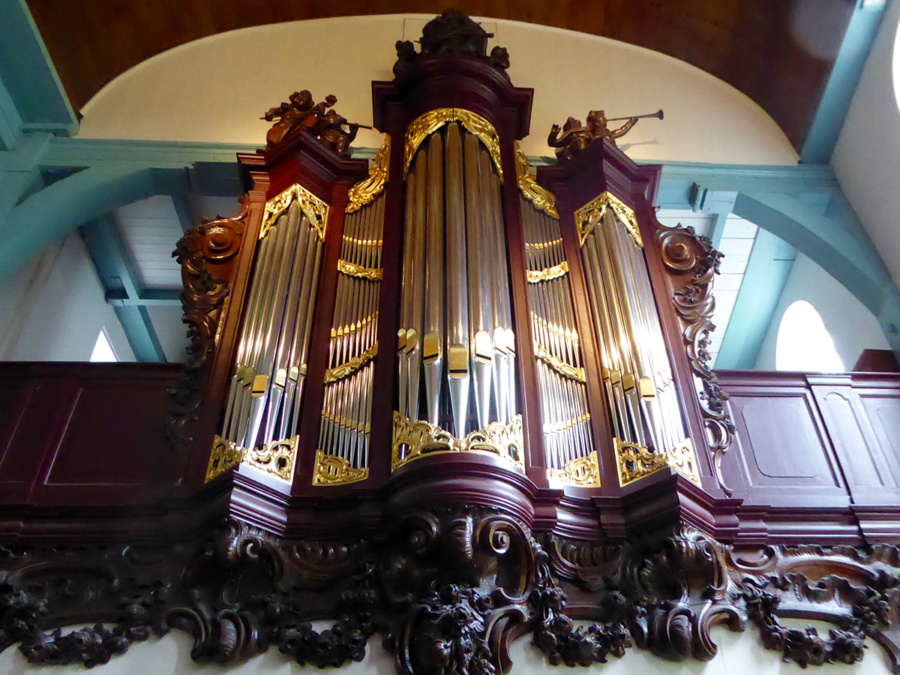 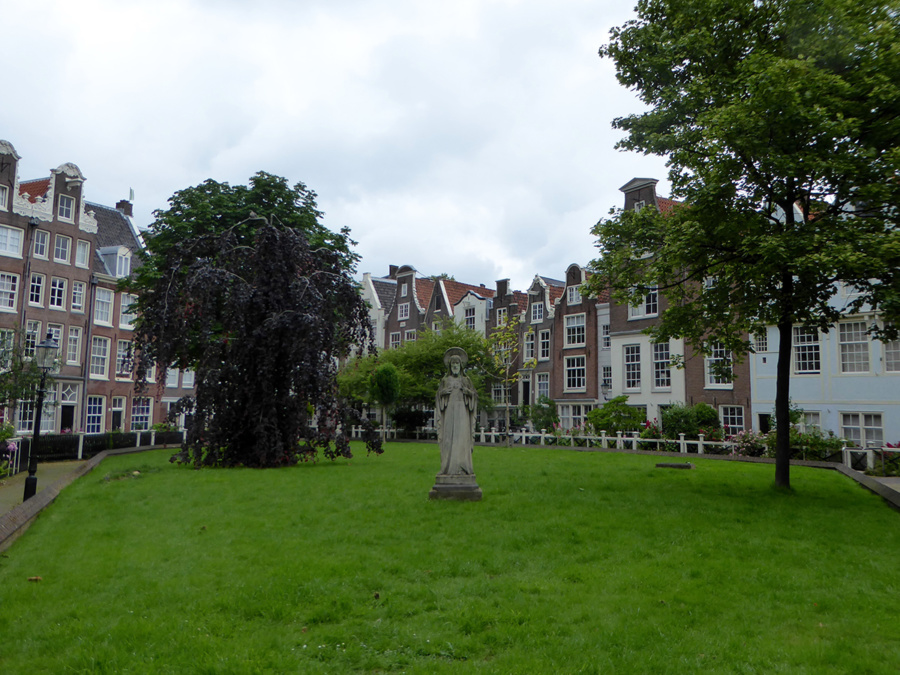 The Waag was where Dr. Nicolaes Tulp, a surgeon and former mayor of Amsterdam, used to perform public autopsy. Rembrandt even made a painting about this and it’s called The Anatomy Lesson of Dr. Nicolaes Tulp. Interestingly, the ground floor is now a café and a restaurant!

The Royal Palace of Amsterdam is one of the three palaces still used by the Dutch Royal Family. Completed in 1665, the building served as a town hall until 1808 when Louis Napoleon, brother of French Emperor Napoleon, declared it as his personal residence during his brief reign as King of the Netherlands.

Amsterdam has more or less 70 museums, big and small, serving every type of interests, that attract millions and millions of people every year. Due to time constraints, I didn’t manage to go inside any of them but seeing them from the outside was already satisfying, I must say! Let’s start with a museum dedicated the most famous Dutch person.

Rembrandt was a 17th century Dutch painter and etcher, and rose to prominence during the Dutch Golden Age. This museum gives visitors a complete Rembrandt experience. It has been meticulously refurbished with furniture, art and objects from that time. An almost complete collection of Rembrandt etchings and stages inspiring exhibitions about him, his predecessors, contemporaries and pupils can be found inside.

You can buy tickets on their official site, €13,00 for adults and €4,00 for ages 6-17. Entrance is free for children with age 5 and below. The museum is open daily from 10:00 AM to 6:00 PM. Ironically, despite Rembrandt being one of the most famous Dutch and most revered artist, the queue to go inside the museum is not usually long. I think when we were there, there wasn’t even a line.

See, read about, hear and experience how the city has developed in the Amsterdam Museum. You will discover the story of the city through a large number of masterpieces such as an aerial map from the Middle Ages and Breitner’s The Dam. 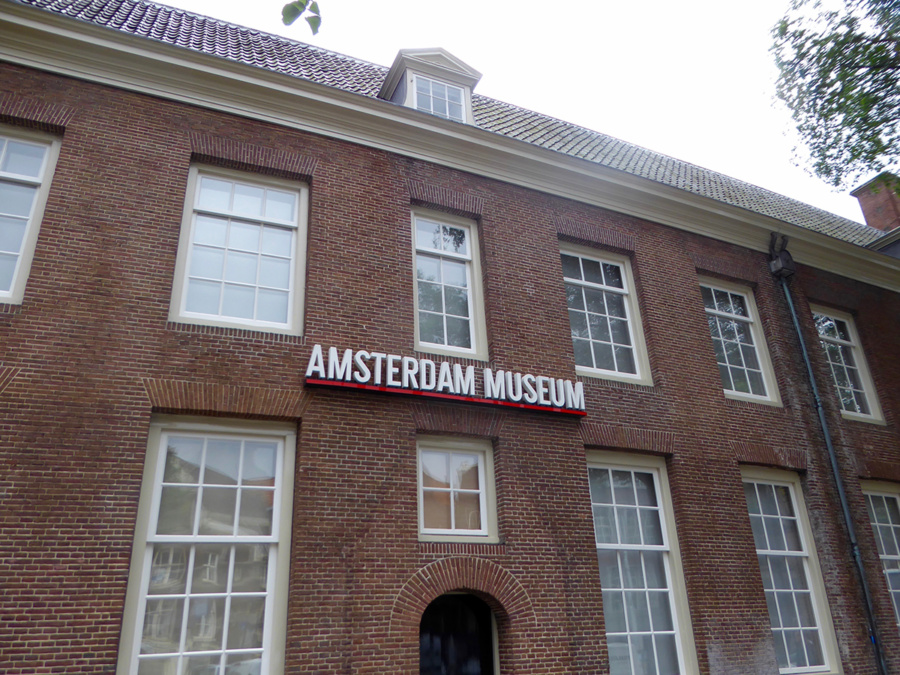 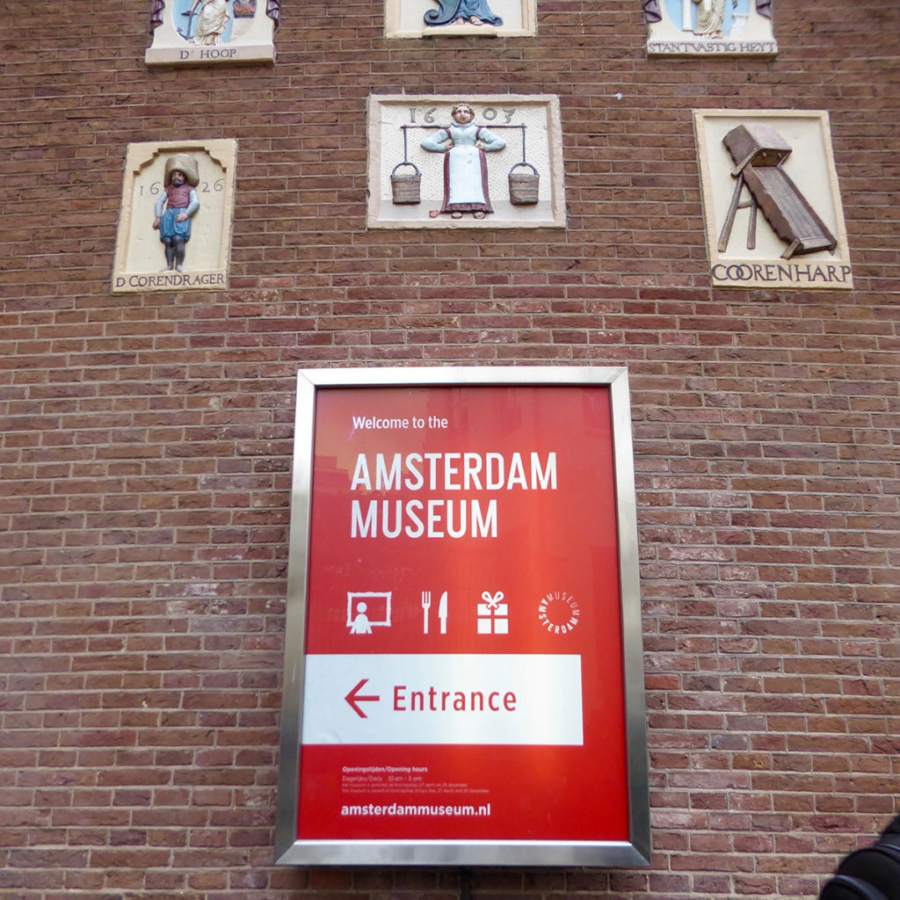 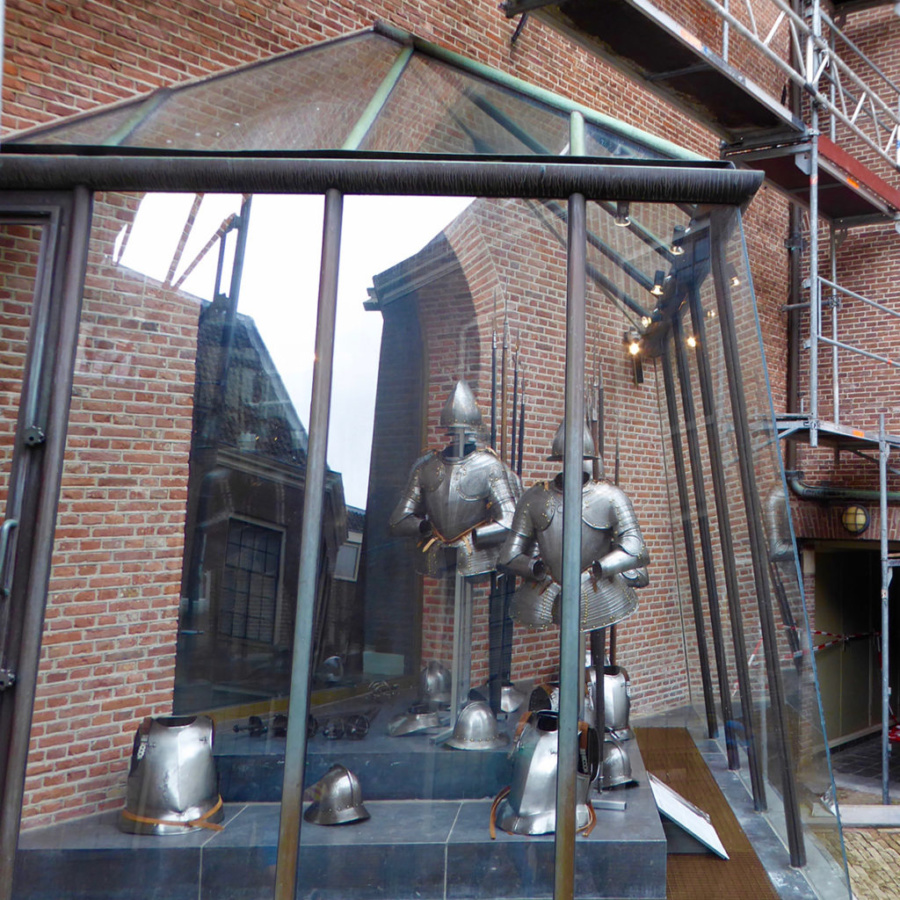 What is the story of Anne Frank? During the time of Nazi invasion in Netherlands, Anne together with her family lived for two years in the annex of the building where her father worked. The doorway to the annex was concealed behind a moveable bookcase. There they hid for their lives, and during those times, Anne wrote her world-famous diary. The hiding place was later on discovered, and all of them were deported to various concentration camps. Only her father, Otto Frank, survived.

They later on found the diary that Anne wrote where she stated she wants her diary to be published as a novel after the war. With her father’s efforts, the book was first published in 1947. It has since been translated into over 60 languages from its original Dutch version. 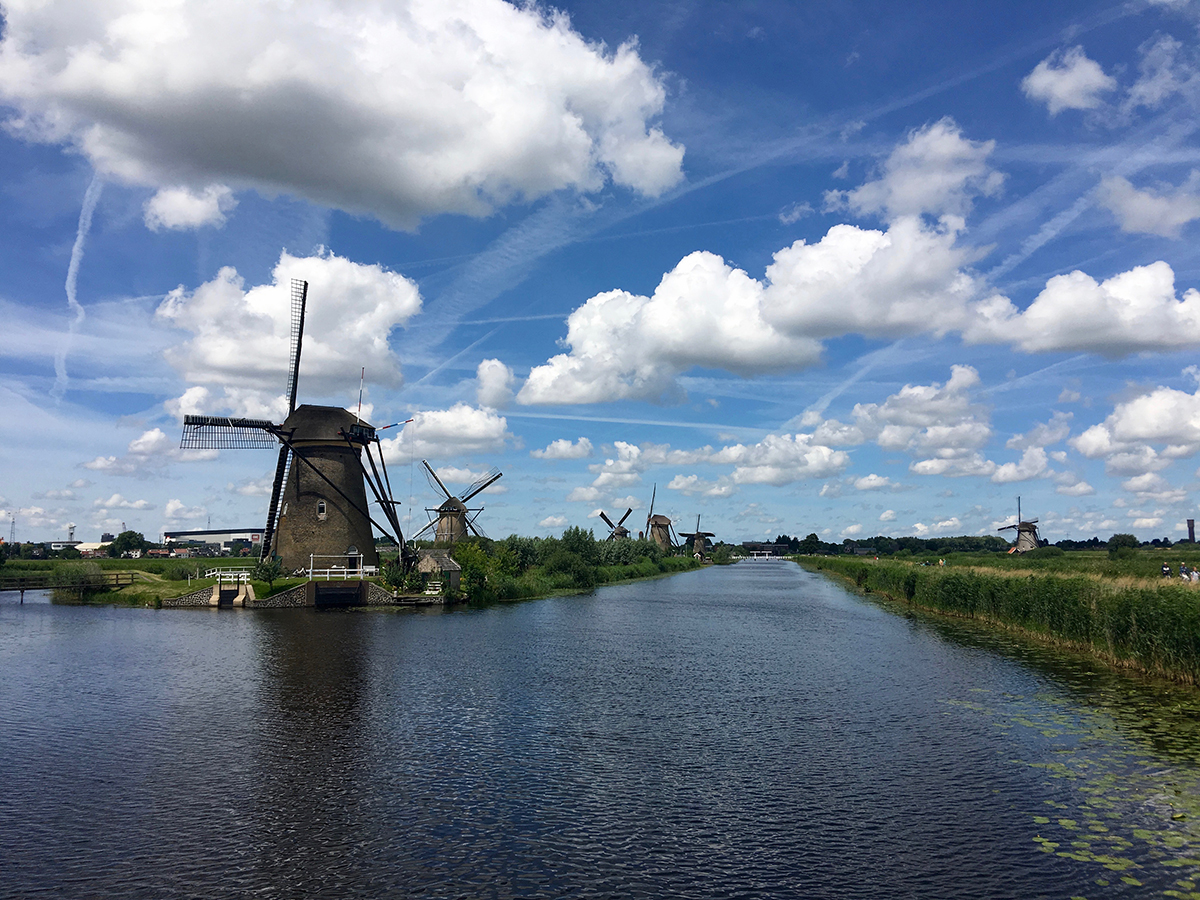 Rijksmuseum (The State Museum) is Amsterdam’s largest art museum. Inside it are world-famous masterworks from the Dutch Golden Age. And as you can see, the museum itself is also a masterpiece. This stunning building has an equally amazing interior design. 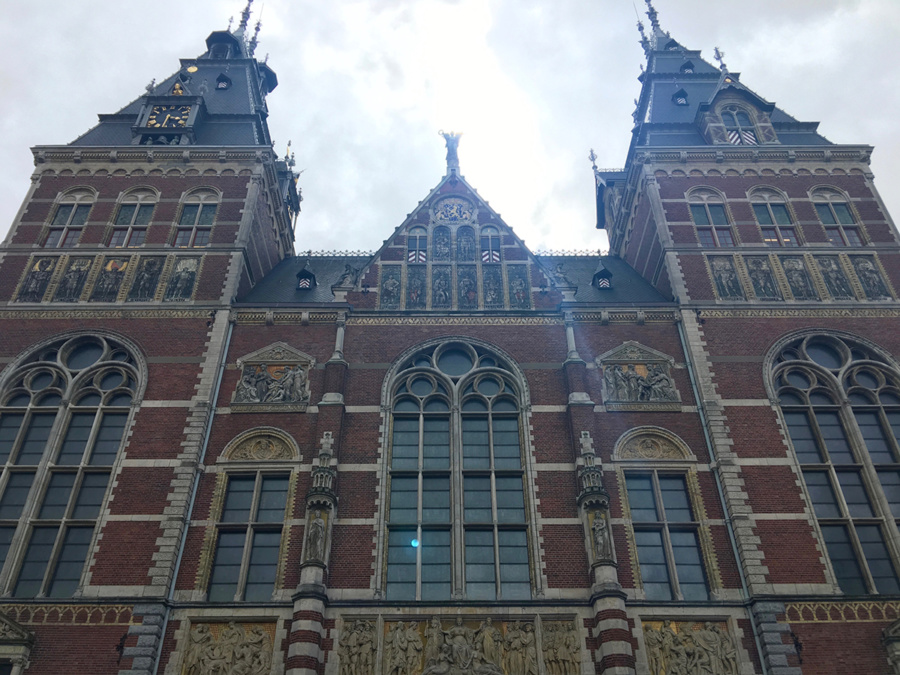 Other museums worth mentioning are Van Gogh Museum and Stedelijk Museum. Unfortunately, I have no pictures to share as one day definitely wasn’t enough to explore them all. 🙁 Will make sure the next time I visit, I will see again all the museums I mentioned above and go inside!

In 2010, Amsterdam’s canal ring was recognised as a UNESCO World Heritage site. Sailing through the canals and viewing Amsterdam from a boat will definitely make your experience more memorable. 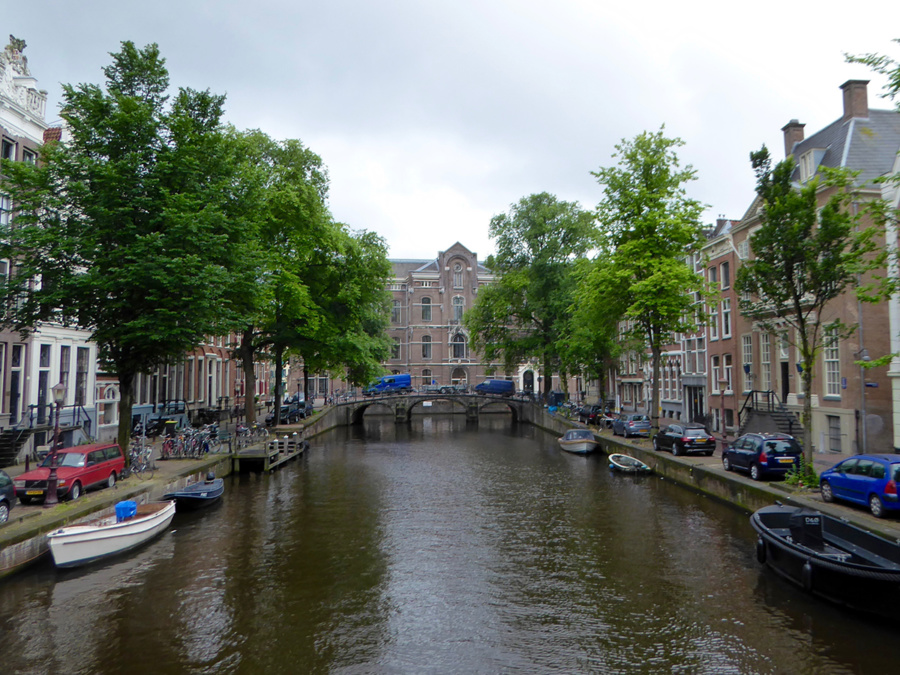 Big thanks to Canal.nl, the #1 canal cruise company in Amsterdam, for sponsoring my ride. Basically, it’s a hop on – hop off canal bus so you can choose where to ride as they have ticket booths at a lot of points. I went to the one in front of Amsterdam Centraal, and they gave me a 24 hour canal bus ticket! 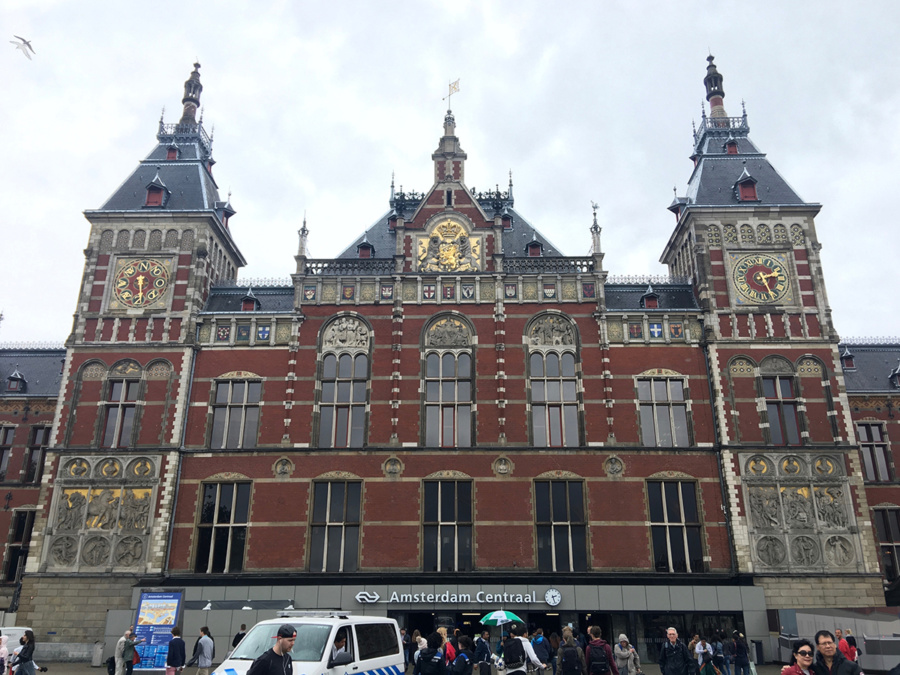 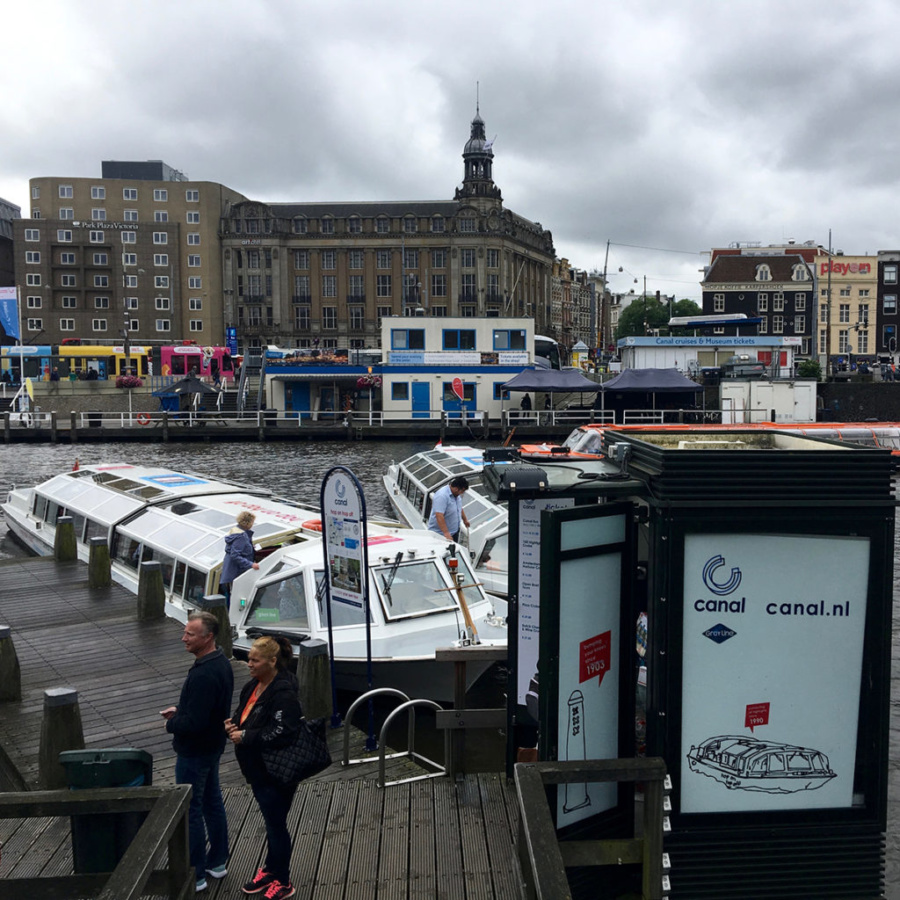 What I liked about their boats is they are big, and that means it’s stable. Also, it would rain from time to time when I was there, so the boat having a convertible roof was amazing! Visit their website to know more about the different services they offer and the prices. 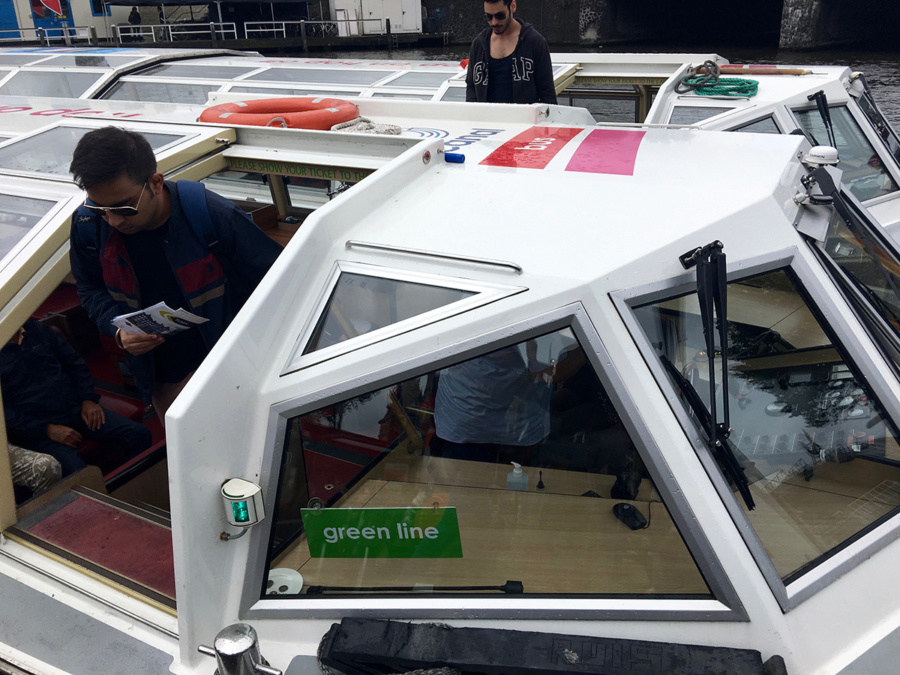 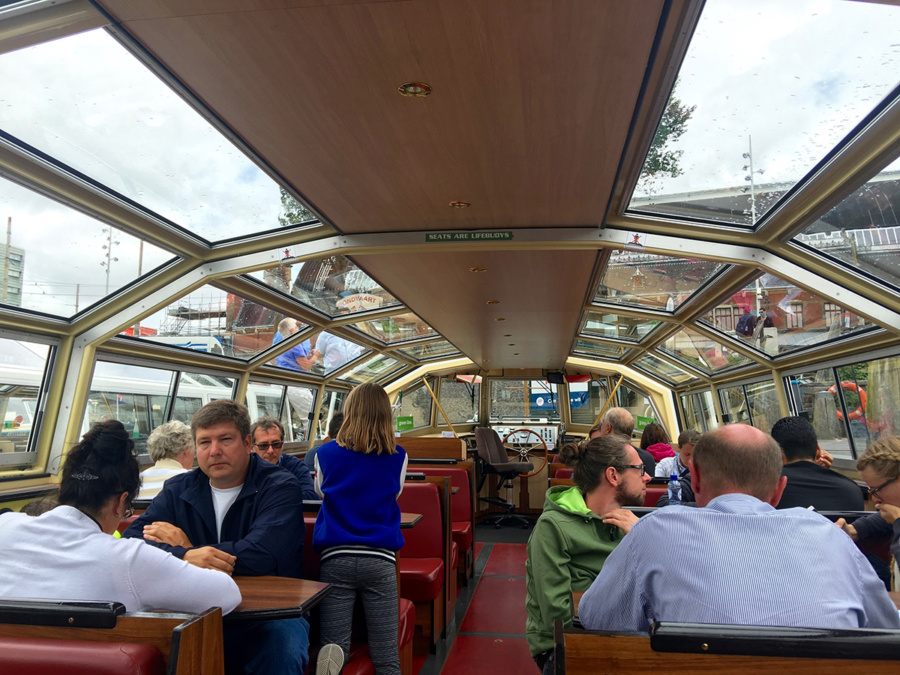 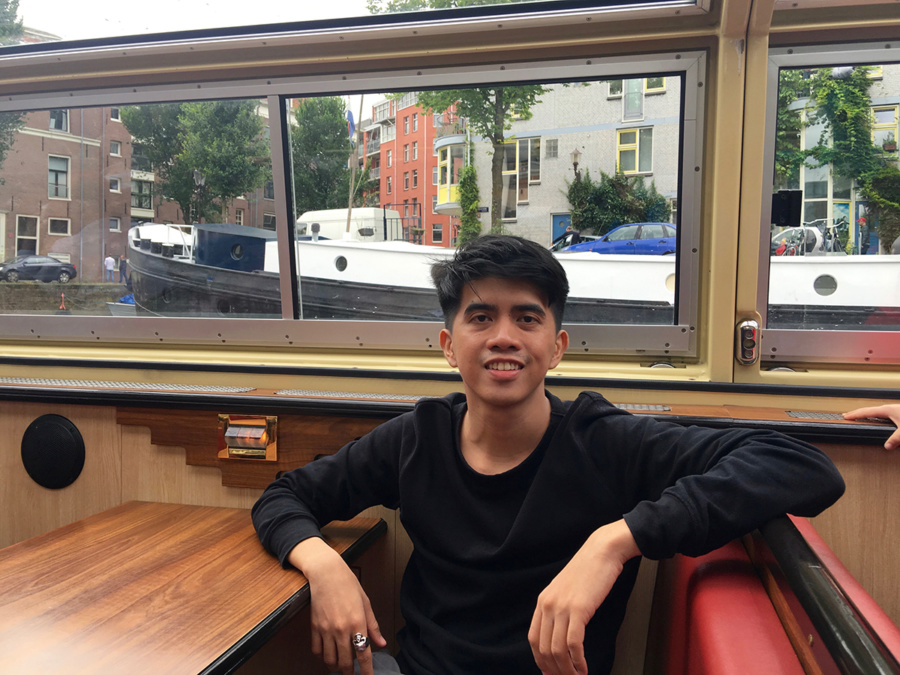 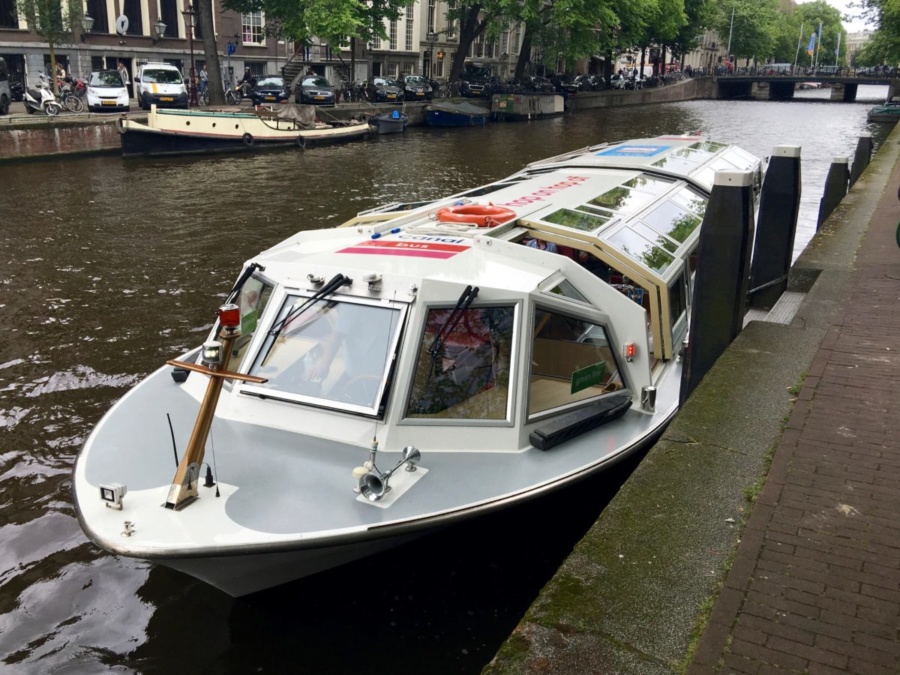 What a day! I was everywhere, but it was absolutely fun! Definitely would try riding a bicycle next time. That’s a wrap for Amsterdam. Dank je for a fun, wet and wild experience! 😀